The letter you are about to read is an unedited piece from renowned African satirist and comedian, Kwaku Sintim-Misa. It is related to a post on this blog posted earlier on October 25, 2014 titled, Changing The African Memo & Maximizing Your Talents (Insight From KSM). In here, no words can describe the ultimate form of honesty and acceptance of the ills purported by his generation. He apologizes on behalf of his generation (including those who are aware or unaware of what they did and are still doing to thrive a status quo that kills creativity). He teaches us with the provision of a unique tool called “Change the Memo“. To the younger generations, be inspired to be deviants of already laid down principles that do not go well for development. Ignore fundamentalism for authenticity in truth coupled with an advance search for truth. To the older generation, its never too late. You can unmake your products of mediocrity by acting just as KSM does. From now on, you can raise your children to question you, rather than agree with you without reason or evidence. Below is the letter. 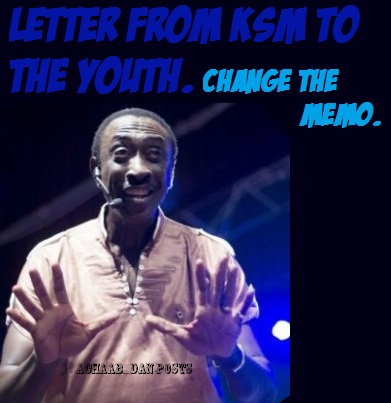 APOLOGY TO THE YOUTH OF GHANA PLEASE “CHANGE THE MEMO”

To the wonderful Youth of Ghana. Please be aware that the legacy we have left you to inherit is a legacy of mediocrity. The “Memo” we have left you is that it is ok to be sub-standard. The standards, we have set are below average but we have convinced you that they are acceptable. Sadly you have believed it and you have become a generation operating  comfortably on a very low bar.  I apologize for that and plead with you to CHANGE THE MEMO.  The Memo encourages you to cling onto the way we did things: Our times were different. Maybe they worked for us. But applying those same guidelines to the demands of  your generation is recipe for disaster.

In our time, it was safe to say things like; “WHAT YOU DON’T KNOW WILL NOT KILL YOU.” In effect we were glorifying ignorance. Maybe we got away with it in our time, but in your time, what you don’t know, may not kill you, but trust me, it will make you brain-dead. There are so many of you walking around confidently but totally brain-dead. CHANGE THE MEMO! Be aggressive  about seeking information. Learn to question things and stop accepting every thing you hear. Many of you have been mentally imprisoned by this narrow scope of thinking. We have left you a Memo of education that teaches you WHAT TO THINK and not HOW TO THINK. The result of that memo is that many of you LACK INITIATIVE AND NO INDEPENDENT DRIVE to excel. This attitude will slow you down and cannot survive in these dynamic times.  CHANGE THE MEMO.

Our times were totally different. We could survive and progress with what I call the “PASSENGER MENTALITY.”  We have left you with that memo. Take my word, you cannot survive with that mentality in your generation.  CHANGE THE MEMO.

In your time, what can make you progress is the “DRIVER  MENTALITY“. The “Driver Mentality” is about ACCEPTING RESPONSIBILITY AND TAKING CONTROL of the direction of  your LIFE. It’s about understanding that in this world  there are CHOICES AND CONSEQUENCES. That you are responsible for the choices you make and that you must be PREPARED FOR THE CONSEQUENCES OF the CHOICES.. The ‘PASSENGER MENTALITY MEMO‘ we have left you makes you the passenger in your own life. You are not in  control. You are at the mercy of the driver. You have no control of where the bus is taking you. In effect you are not in Control.

It is that mentality the breeds the VICTIM SYNDROME. You do not take responsibility for the choices you make, neither do you recognize that whatever consequences you are going through in life is a direct reflection of the choices you made. You always see yourself as victims.

Its amazing how much time some of you spend complaining about your  so-called HATERS! With a DRIVER’S MENTALITY even so-called haters give you MOTIVATION to succeed.

All I am saying is that your NEGATIVE state of mind, is a direct legacy from our memo. I write to apologize for that but more importantly to draw your attention to the fact that you are still holding on to them and it is a recipe for failure in this “e-generation”

I am happy though that some of you are not using that MEMO. Mabel Simpson has changed the Memo, so has Fred Degbe, so has Tony Seneya, so has Gideon Agyare so has Kafui Adzah and many many more that I can’t mention. They have the driver mentality and so can you, From now on: Its