Students might expect to hear stuff like, “Item 13 is massively assurred, fresh guys and ladies will be present, or there’ll be a free photoshoot with Phosmic Impressions” as reasons to persuade one to be at a Tek Talk. But I’m here to be different, to go against the unnecessary tide of reasons purported by mediocrity. The value of Tek Talk goes beyond that, it outweighs all the reasons illustrated at the onset of the post as that may actually be reason why many attend events, the item 13 idea, for sure. Lets however have an overview on what Tek Talks are about.

Tek Talk is a monthly conference series organized by the Students Representative Council (SRC) of the Kwame Nkrumah University of Science & Technology (KNUST) along with its local National Union of Ghana Students (NUGs) to empower and promote capacity building among students. The show invites personalities from all spheres of our  cosmos to interact and share their stories with the youth. Tek Talk’s first edition started off in September this year with Mr. Prince Kofi Amoabeng(UT Holdings) and Mr. Kojo Yankson(Presenter, host of Joy FM‘s Super morning show) as speakers. The second edition for the month of October had the best of playwrights, Uncle Ebo Whyte. November’s episode was dubbed,”A Night of Stars” because it had Kofi Okyere Darko (K.O.D), Kwaku Sintim-Misa (KSM) and Bola Ray as mounters of the stage with thrilling insights related to relentless determination; sharing their painful heartbreaking, jawbreaking yet fascinating but happy pathway into the successes we normally long for.

Now, we can get to why you gazed longer than usual upon this post.

Summary
We have known about an abhorring and unfortunate fact that even those who tackle courses with highly readable content dislike reading. I usually use my blog to exemplify this. Its really not as if it is a biased platform on foreign issues, in fact it always writes on issues every human from any location of the planet could relate to, yet the European and American continents always sweep the highest views to as much as 97%. I recollect writing about the controversy between actress, Lydia Forson and preacher, Archbishop Nicholas Duncan-Williams. This post which had two key figures from Ghana had more views in the US than in Ghana. No wonder, its partially possible to assert that, “if you desperately need to hide a gem from an African, encode it in the words of a book.” Now, this is where the Tek Talk comes in. You don’t need to do what you hate, read the voluminous biographies and autobiographies of personalities because the show presents to you that in detailed brevity within an hour. Thus, the failure to read will no longer become an excuse for you not to uncover the realities you need to see.

Education
We all need knowledge. Whether its under the unwanted confines of the classroom, voice of historic events from our grandma, articles on blogs like this one or shows presented on radio or television, we need to be well informed and practically put information acquired to use. When speakers arrive they do just that, they inform you, give you insights on the varying choices and their unlimited characteristics and implications. One of the things I personally had from Uncle Ebo Whyte on Tek Talk’s platform was that “A man who respects his penis was difficult to trap.” This has affected my philosophy and lifestyle, it is still turning around for my good. I am assured that you’d also find something worth learning and relateable all because of the multifaceted nature of human species’ personalities

Learn from Experience
One of the clichés I am usually aimed at killing is the notion that “experience is the best teacher.” It used to be but no longer is. You don’t need to commit the same mistakes committed by past civilizations because of the existence of disciplines like history and shows like Tek Talk. You need not think initially that the world is flat before later discovering its spherical nature. Tek Talk invites exceptional personalities who have already committed the potential mistakes you could have done years to come all because of their experiences. Why not learn from them rather than going round in circles to meet the box? We as the youth must add up to their developments, not reinvigorate the flaws of their past ignorance.

The Power Of A Celebrity
Celebs carry power, usually the influential ones come with an aura of strenght that triggers the masses to push beyond what they thought they could achieve. Imagine being on a soccer field always missing that penalty and your favorite player, say Lionel Messi, Andre Dede Ayew or Cristiano Ronaldo taps you on the shoulder with these words “Believe in yourself, yes you can!” As that may not guarantee you getting it right the next time, there is still that assurance that you will be motivated to do better. Sometimes thats all we need, the motivation to push forward. Proverbs 12:25 puts it this way. “Worry can rob you of happiness, but kind words will cheer you up.” Tek Talk brings you up close with influential personalities to tap you on the shoulder with words “Believe in yourself.” Personally, I was inspired to do better after KSM called on us, the youth to change the memo of mediocrity perpetrated by his generation. There is always an inspiration somewhere in a Tek Talk auditorium. 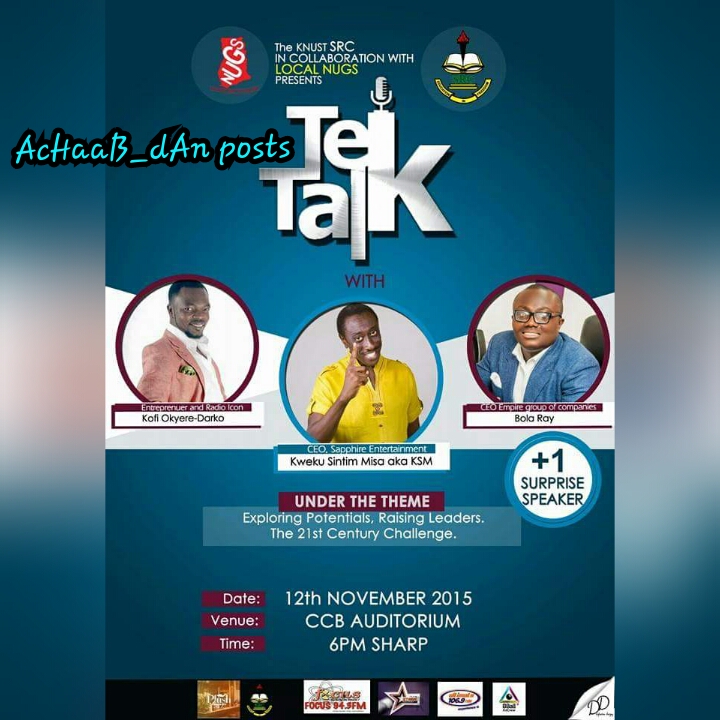 Opportunities
The show does not just educate, inspire and summarize. It goes a step further. You get to meet that personality to ask those questions you’ve been waiting for years to ask. Someone asked Bola Ray a question on how he came by the name Bola, the reply was insightful. There was also an instance where another asked how celebrities combined their work in showbiz to the responsibilities to be met at home as a family member. Another opportunity lies in students given the chance to outdoor their talents to people they hardly come by. Who knows? A student may be the next lucky Kojo Oppong Nkrumah whose presentation gave him a job with Joy fm. November’s edition caught Bola Ray urging students to apply for an internship in any of his numerous affiliated firms.

Entertainment
“All studies and no fun, makes Abalansa a dull literate.” We are not robots? We are humans living with not just instincts but the desire to accomplish desire. Every Tek Talk show has numerous thrilling performances to keep the audience glued to their seats. The strings of the violin with the theme song of the Pirates of the Caribbean still resonates in my mental faculty, I just can’t get over that soulful performance. Spoken word, acoustic, organ and vocal performances have been examples. In fact, some of the personalities invited themselves have a great sense of humor. KSM’s talk was like a night of gazillion laughs.

No Gate Payment
Having all this cannot be seen as free in entirety by the students because the money comes from the SRC. But at least, you don’t have to go through the stress of waiting in a long queue at the gate to Tek Talk auditoriums. You just go when you want. There is a better freedom with putting the money of students to needed use.

Its my hope that TEK TALK will grow to match up the quality of TED.