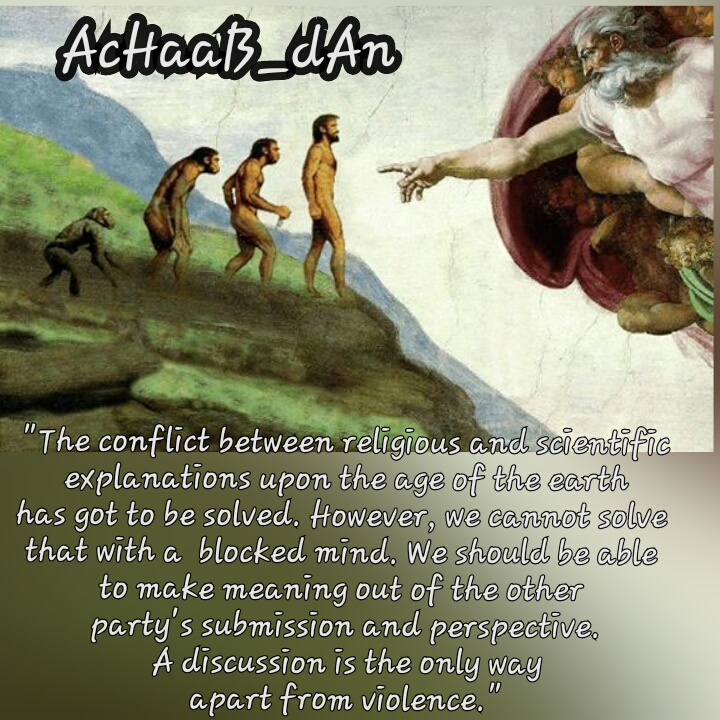 The reality is that, it is not possible to have the true zest of uncovering knowledge under scientific scrutiny without coming into combat with some religious concepts. I’m currently at an Urban Scociology lecture and a conflict has been manifested to me. I quote the lecturer and a book on Urban sociology:

“Sometime between 6000BC and 5000BC in the basin of Nile, Tigris-Euphrates and Indus river valleys, settlement emerged more than ten times the size of the earlier ones.”

The greater part of my course mates were not perplexed after hearing the statement above because they had their own way of learning; to chew and pour whatever was said in the lecture theatre regardless of one’s level of understanding. But I am different. I choose to be stubborn.

According to the Bible, the world should be around 6000 years old. Or say, man was created only 6000 years ago. It also states that man was created five days after the creation of the world which invalidates the scientific idea of man’s evolution along billions of years. If we decide to take the Holy Book by its words, that will mean that the period between our century (21st) and the era of Christ on earth covers 2000 years. Thus, 4000 years separate the time of Adam to the birth of Christ. One arrives at this Biblical assertion by calculating the years of generations genealogically. Taking that of Jesus for instance, Mathew 1: 1-17 asserts that there were 42 generations from Abraham to Christ and gives a breakdown of his patrilineal line.

The scientific fact under the study of urban places informs us that sometime between 6000 to 5000 years before the birth of Christ, settlements emerged around the basin of Nile. The larger envelop of science through analysis on visiting meteorites, rocks on the earth and moon also informs us that our earth has an age of 4.54 billion years. This information was retrieved under the scientific process of radiometric dating. For more information on the scientific age of the earth, visit Space.com.

Now, one of the two has got to be wrong because the scientific fact stated at lectures dates back to even 2000 years before the time of creation asserted in the Holy Book. Its either science or bible.

I’m afraid to make a choice now on which side to accept because either will hurt. When I opt for the Biblical assertion, I defy the use of reason and the scientific method, a process known to have made understanding natural phenomena better. I may also belittle and abuse God’s power by not using what He created the Brain for what it was actually meant for; the ability to think critically. By choosing the path of science in the religious environment I find myself within, I’ll be perceived as the Devil’s reincarnate to conservative fundamentalists because of their approach of zero evidence (faith).

When many see me as Luficer, that creates the certainty that they would not come close to me. It certifies stigma. This wouldn’t have been a problem if I happened to be the only one living in our cosmos. There always comes a time when we end up not being independent. That time comes when you need a helping hand. That helping hand may be family. And the fear of being ostracized from the family and friend circles I truly love keeps me in stagnancy; a position that neither moves forward or backward. What can I do? I am perplexed.

[Any with help may comment in the dialogue box below]