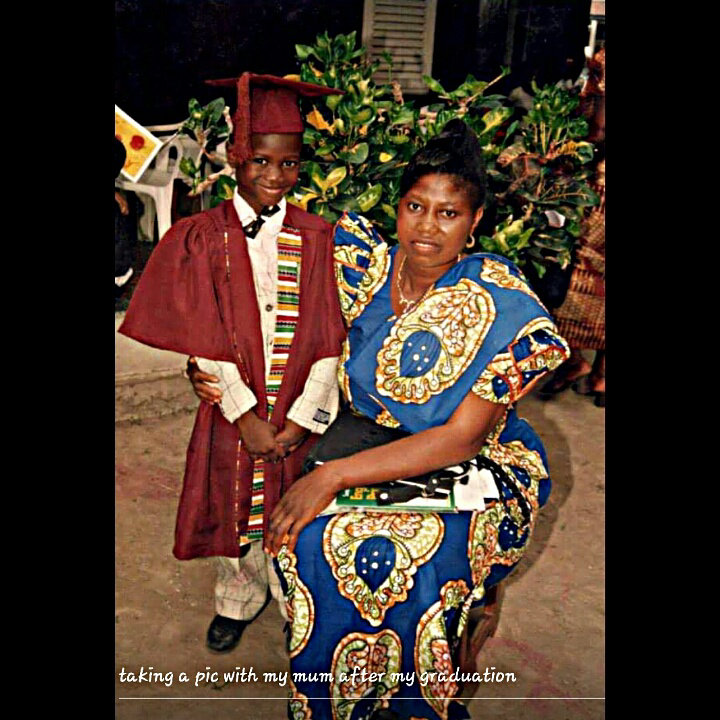 I love you mum. Happy Birthday. As a child in a society engulfed with prejudice and the relatively rare understanding of a child’s questioning trait, society tagged me stubborn. They saw nothing good in me, at times Family did same. It was like, any dispute or misbehavior should definitely have Abalansa in it, as they always said. And an instance at Nungua taught me of my mum’s love, probably that which every real mother bestows upon her children.

At a time we lived in a typical compound house (rented chamber and hall), there was the need to share everything; the toilet, bathroom and pipe-borne water with people other than immediate family. This meant an inevitable lenght of queues at busy times. So I took my gallon on a Saturday morning and headed to the tap. I waited till it was my turn. Knowing I now had every right in terms of a due process to fetch my water, I placed my gallon under the flow. But it was taken, the value found in my waiting act was ignored. In fact, it was replaced. I looked above only to see a thick young woman, within the ages of 25 to 30.

“Children of today have no couth. The respect is gone. Gone are the days. Don’t you see elders standing around and you still want to fetch before them. Go back!” she said. I was a rebel. I never cared about society’s values or restrictions at the time so long as we equally needed water and I followed the rational process of being in line till it was my turn. So it became a battle of words between the 9 year old me and a woman close to the age of my mum. “I also need the water. You are grown, yes, I can’t ignore that. But so is my mum and I am fetching the water for her. So I’m sorry, I’ll fetch before you” I told her. My words definitely triggered her anger. She probably thought “how could a small boy like this talk to me like that?” So I was beaten, beaten so much that I cried home with an empty gallon.

And this is where the magic happened. My mum saw me and asked what had happened. I told her everything, but I thought she wouldn’t believe since I was the stubborn deal at the time. By the least, I had my own issues with her concerning incessant disagreements between my kid sis and I. Mum looked into my eyes. She believed me to my own shock. She held my hand with her right, the gallon with her left and marched to the pipe stand. I was defended. That scene is still one of the most beautiful to me.

“This is the last time I should hear of something of that sort. Just because they say he is stubborn, you want to take advantage over that” saying these words to the cheat at the time, she took the woman’s basin off the tap, poured it all on the flowers nearby and placed my gallon at its right spot. She ended with “If you are a woman like I am, take the gallon from its position” till now, the woman hasn’t taken my gallon off that spot literally. And that’s just one of the billion reasons why I love my mum. Thanks for being as you are, Christiana Awuni. You are always in my heart.

One thought on “Why I Love My MUM, Why Do You Love Yours?♥♥”